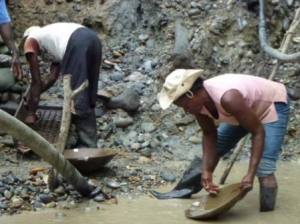 According to the United Nations, per capita mercury pollution rates in Colombia are the highest in the world. In the last decade, several networks of organizations have been formed, advocating for the protection of human, ethnic and land rights as well as for environmental protection in the mining sector.

Water pollution from mining in Colombia has been connected to mercury and cyanide use as well as sedimentation of water bodies. It is estimated that between 50 to 100 tons of mercury per year contaminate water ways. In Antioquia alone approximately 50 tons of mercury contaminate rivers in the municipalities of Remedios, Segovia, Zaragoza, El Bagre, and Niza, where 90 percent of the population live from mining.

The Oro Verde program in the Chocó Bioregion of Colombia was the inspiration behind the creation of the Alliance for Responsible Mining, who have pioneered Green Gold. Check their website: www.communitymining.org.