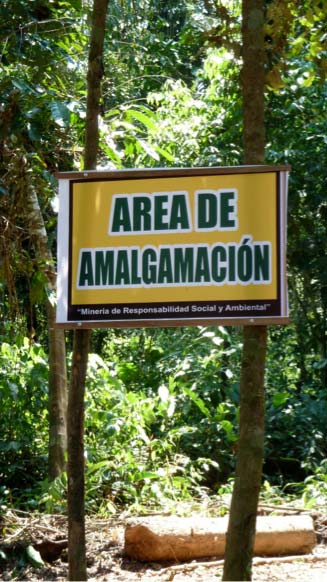 In Peru, the environmental conflict is a hot topic. It is always present in the mass media and official governmental messages. Both spread their rather one-sided vision of small-scale and artisanal mining as being a devastating activity, executed by violent immigrant miners, who lack respect towards their environment and the authorities. The environmental NGOs present in the area are in favor of preserving the forest.

In 1990, the Natural Reserve Tambopata was created and implemented to protect an area of high biodiversity south of the Madre de Dios river. It includes a so called ‘buffer zone’, which was created to diminish the influence of human activities on the actual Reserve’s ecosystem within its boundaries. In this buffer zone, in the Malinowski River basin, immigrants were already mining riverbanks, river bottom and related jungle bush strips before the park was officially declared.

Traditional miner families and associations like APAYLOM, AMATAF, Munuani and Kotshimba were never told to leave the area nor the buffer zone. This changed drastically with the recent gold rush. In February 2010, the Ministry of Environment issued an Emergency Decree in order to stop destruction of the rainforest. The Decree contemplates mining zoning, exclusion areas and technical support. Since early 2011, the Ministry is also running a regional Government Support Program (APOGORE).

Oro Justo.  Also has an app (for Android).