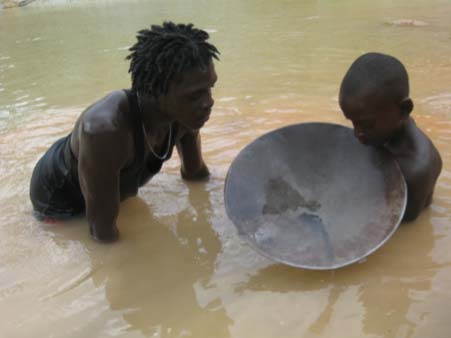 In Suriname, local tribal groups have no formal property rights to their home lands. Also they are not protected by environmental laws. Water from the river is being used to drink, but also to cook, bathe and wash. Mercury pollution of the water is a big risk to their health and affecting their diet.

In all Surinamese populations that have been tested on mercury, the mercury levels exceeded the World Health Organization standard of 10 μg/g. Especially within the Amerindian Wayana of Apetina and the Lawa Rivier, mercury levels were very high. The Ministry of Health has succeeded in reducing the prevalence of malaria in Suriname. Suriname has actively sought out Brazilian gold miners for malaria interventions. The Global Fund has given financial support to the Ministry of Health and PAHO for a project to fight malaria in the gold fields. However, gold fields remain risk areas.

Looking for Gold, Finding Malaria. Assessment of changes in malaria related knowledge, attitudes and practices resulting from the Ministry of Health malaria program in small-scale gold mining areas in Suriname. Report written by Social Solutions for the Malaria Program, Ministry of Health, Suriname (with PAHO) – 2012.