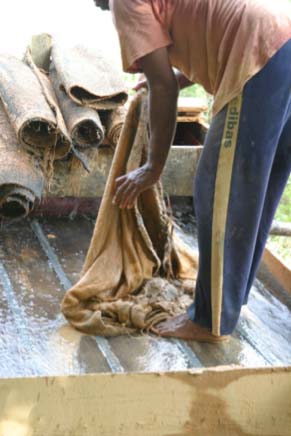 In Brazil, the holder of a mining license is held responsible for the environmental damage caused by the mining activity. The use of mercury and cyanide is forbidden by law for people without a license. In practice however, almost all small-scale miners work without a license, and do use mercury.

In 2006, the Federal Government created seven Nature Conservation Units in the Tapajós region, in order to protect its biodiversity. Many of these units overlap with the small-scale mining reserve of Tapajós, created in 1983 by the Ministry of Mining. With the creation of these Conservation Units, all mining activities in these areas became illegal. However,  many miners had obtained their mining license already before 2006; their licenses have not been withdrawn. So they work with license but at the same time illegal.

Before receiving a mining license, you have to obtain an environmental license. This is not an easy task. It requires a lot of paper work: environmental impact assessments, maps, mineral exploration reports, and many more documents. Things are complicated further by a slow bureaucratic handling of the applications. Applications for mining licenses before 2006 are still being processed at the office of DNPM. This is confusing and causes unrest and insecurity among the small-scale miners in Tapajós.

In 2002, the United Nations Industrial Development Organization (UNIDO) initiated the Global Mercury Project, focusing specifically on the concerns of mercury contamination caused by small-scale mining. This was a very ambitious project. It intended to introduce cleaner technologies, to train miners, and to conduct environmental and health assessments. Brazil was the only Latin American country participating in the project, specifically in the Tapajós region. As a result of the project, the use of retorts had increased. Nonetheless, mercury remains to be used as the main method to separate the gold.